HomeTwo Ten Footwear Foundation and Children’s Trust charities team up with Shoes.com for day of service. 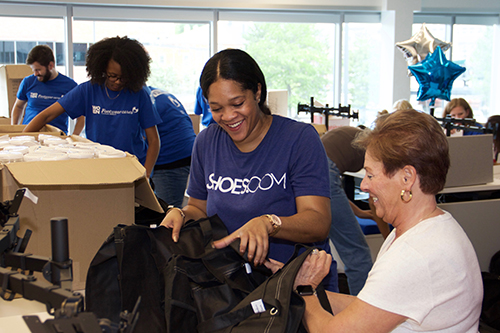 On the 18th anniversary of September 11th, now designated as National Day of Service, Two Ten Footwear Foundation partnered with Shoes.com – our Footwear Cares® Title Sponsor – to support the Children’s Trust by packing 1,000 bags with essential childcare items. The National Day of Service and Remembrance was originally founded to channel the tragedy of 9/11 into community-driven acts of support and healing. Similarly, Two Ten Footwear Foundation’s Footwear Cares® (FWC) initiative engages footwear industry members in community-service events for the common good. In that spirit, over fifty employees from Two Ten, Shoes.com and the Children’s Trust, came together to support the most vulnerable among us.

The Children’s Trust opened the day’s event with a video presentation detailing the important work they do to stop child abuse and neglect across Massachusetts. In the video, parents spoke about the skills and coping strategies they acquired that helped them become better fathers and mothers. Elizabeth Moderski, the Senior Marketing Communications Manager at Shoes.com, noted that “As sponsors of Two Ten and their Footwear Cares initiative, we at Shoes.com are proud to support community-service in the footwear industry, especially when it comes to supporting the Children’s Trust and the vital work they do.” Stacey Nee, the Marketing and Communications Director of the Children’s Trust, expanded on that sentiment by emphasizing how “The work we do is made possible by cooperation between organizations like Two Ten Footwear Foundation and companies committed to helping local communities. Companies like Shoes.com.” 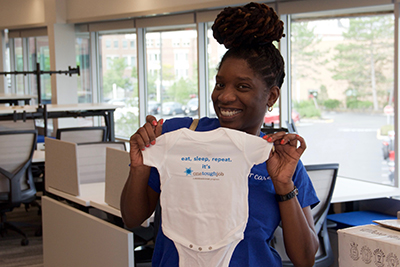 And so, cooperate we did. The open layout of Shoes.com’s Charlestown headquarters was bustling with activity as their employees, in addition to Two Ten’s and the Children Trust’s, worked to stuff 1,000 baby bags with 1,000 bibs, baby hats, onesies, and sippy cups, among other childcare necessities. The spirit was light, but everyone was determined and focused to make sure each bag got the proper items and was sent to the correct drop-off location. In short order the bags were packed, taken to their waiting cars, and sent off to where they are needed most by volunteers and staff from the Children’s Trust and their network of Family Centers across the state.

Overall, this year’s Day of Service was a testament to the power of coming together as a collective for a community in need. Corporate stewards like Shoes.com embody the kind of values that we at Two Ten Footwear Foundation strive to support through our Footwear Cares initiatives. Most importantly, we could see the impact we would be having with our own eyes. As the supplies got sorted, and the bags piled up, it became clear we had just helped 1,000 children in need. 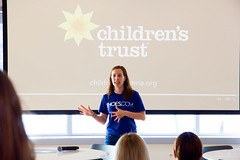 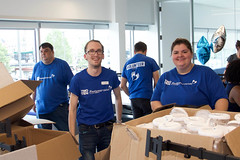 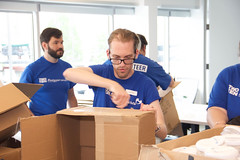 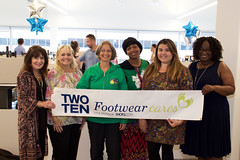 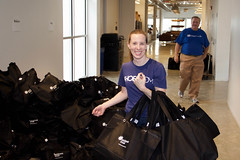 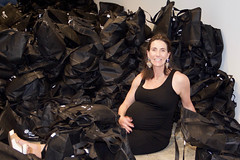 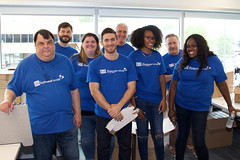 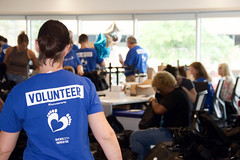 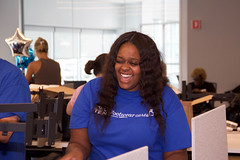 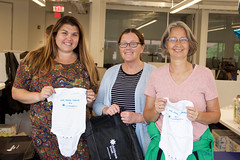 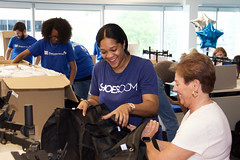 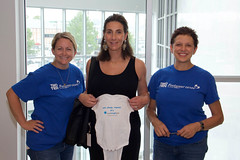 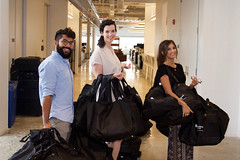 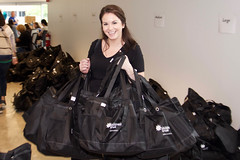 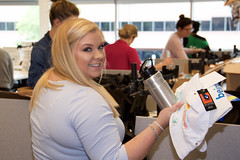