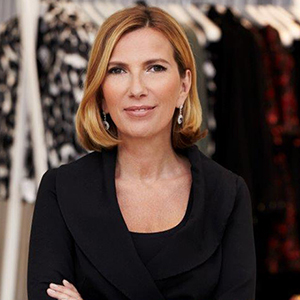 Liz Rodbell is a seasoned executive with more than 30 years of experience in the fashion industry. In 2018, she was appointed to Group President at Steve Madden where she oversees retail, accessories, apparel and licensing. She leads the strategy and operations of retail with significant e-commerce growth through the elevation of the digital experience and the wholesale accessories and apparel business, with distribution from department stores to the mass channels.

In 2014, she was appointed President of Hudson’s Bay Company’s multibillion-dollar department store group, where she oversaw the integration of the senior leadership teams and operations of the Hudson’s Bay and Lord & Taylor banners, strong ecommerce growth, and elevation of both the digital and in store experience. She joined Lord & Taylor in 1985 as a dress buyer and rapidly progressed to General Merchandise Manager roles with various areas of responsibilities. In 2008, Liz was promoted to Executive Vice President of Merchandising and advanced to Chief Merchant for both Lord & Taylor and Hudson’s Bay Company in 2012.

Liz was awarded an honorary Doctor of Commercial Science and Distinguished Achievement Award by LIM College in 2017 and earned a degree in Fashion Merchandising from Tobé-Coburn School. Named one of Crain’s Most Powerful Women in New York in 2015 and 2017, Liz was inducted into the prestigious Footwear News Hall of Fame in 2017, honored by the Mother’s Day Council as Mother of the Year in 2015, presented with the Women in Need’s Way to Win Award in 2014, and FABB’s Accessories Hall of Fame Award in 2013.  Currently, she serves on the Two Ten Footwear Foundation’s Board of Directors and Children’s Tumor Foundation Board of Directors as well as the Parsons Board of Governors where she is Chair.  She and her husband, Mitchell, have two daughters and reside in New York City.

Liz joined the Two Ten Board of Directors in 2014 and currently serves on the Education and Communication Committees.