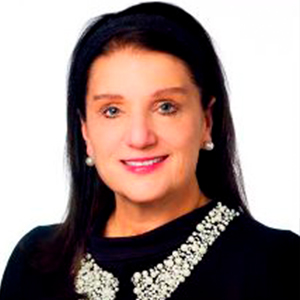 Deborah L. Ferrée was named President of Camuto Group in June 2021, previously serving as President of Designer Brands (parent company of DSW and Camuto Group) beginning in February 2019. She was named Vice-Chair of the company in 2006.  She joined DSW in 1997 and held roles of increasing importance in the organization before being named Chief Merchandising Officer in 2004. She came to DSW with nearly 20 years of diverse experience in retail with organizations such as Burdines (a division of Federated Department Stores), Ross Stores, and The May Company. Debbie graduated from the Warrington School of Business at the University of Florida and serves on the Dean’s Advisory Council for the business school. Today, she serves on the Olive Crest Board of Trustees in Orange County, California, which is a nonprofit supporting foster care and adoption of children, and currently serves on the FDRA Board of Directors.

In 2015 Debbie received The A.A. Bloom Award which honors an individual who has given greatly to Two Ten through his or her initiative, hard work, dedication, and unselfish actions in the spirit of the late A.A. Bloom, one of the founders of Two Ten.