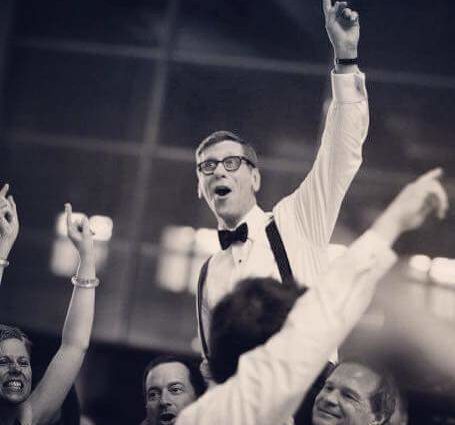 Because of Bruce Fendell’s dedication to his community, his family wanted the students chosen for this scholarship to show an interest in service to the community and a passion for helping others.

In 2018, the Bruce Fendell Memorial Scholarship was started in honor of beloved industry veteran Bruce Fendell and has sponsored many scholars since. The fund currently supports Keaira Williams, attending Loyola University Chicago.

Long time industry executive Bruce Fendell died December 5, 2017. He was born August 8, 1955, the same day and month as his father and grandfather. Yale Fendell, his father, was a key partner at Libco, the East Coast distributor for Adidas back in the 1970s and 80s, and Bruce began working in the family business even as a teenager. He went to work full time at Libco after college and later at Adidas for many years. He also held key roles at Reebok in charge of the licensed business there. Most recently, Bruce had been VP of strategic planning at WSS, the West Coast retail chain, but the Three Stripes were always at his core.

A conversation with Bruce always started with your family and his family, because family was always first with Bruce. No matter who he spoke to, he always seemed to have a nice word for the spouse, children or parent. But Bruce was also a world-class friend to everyone he met. No favor, great or small, was too much. He made warm connections with the powerful and the meek equally and made them feel special whenever he talked to them.

Even after he became ill, he was comforting his family and friends more than they could comfort him. The generosity of his spirit is something that nobody who knew him will ever forget. Family was first, friends second but business was also a passion for Bruce. He kept his spirits up to the very end here, a shoe dog from cradle to grave.

He is survived by his wife of 36 years, Audrey; a daughter and son-in-law, Rachel and Jon Satinsky; a son Harris, now working for Adidas; and two grandsons, Asher and Reid.

“I am a better person today for all that Bruce has taught me. He was a selfless friend who went out of his way to help people around him. We all have a lot to learn from how Bruce lived his life. He cared about his family, friends and business associates in a way that was unforgettable to all that he touched; he was a mentor and friend to many. Let’s keep his legacy alive by paying it forward, as Bruce would have done!”

“My dad was always proud of our family’s connection with the Two Ten Footwear Foundation. His father, Yale, has a scholarship in his name and my dad looked forward to receiving letters from the scholarship’s recipients. His commitment and mentorship to others; his pride for the industry; and his love for giving back were unparalleled. This scholarship allows us to continue his legacy and honor his memory.”

“Bruce was the kind of person who thought more about your happiness than his own. With this scholarship program, his legacy will continue to flourish for many years to come.”

“Bruce Fendell treated everyone with kindness and respect and expected that others act in the same fashion. He was truly a role model to many.”