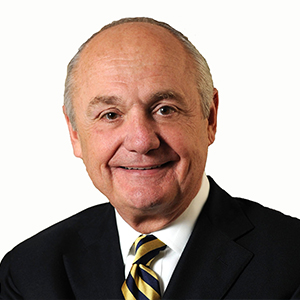 James Issler currently serves as President and Chief Executive Officer of Berkshire Hathaway Shoe Holdings, Inc., (BH Shoe Holdings), an operating subsidiary of Berkshire Hathaway Inc.  Mr. Issler grew up in St. Louis, Missouri and he received his B.S.B.A. in 1970 from the University of Missouri and later served as the President of the Alumni Association. He obtained his M.B.A. from St. Louis University in 1974 and has served as a Board of Directors for Lindenwood University in St. Louis.

Mr. Issler’s professional career began at the Brown Group, Inc. where he quickly rose through the ranks to the position of V.P. General Manager of the Brown Group’s Naturalizer Division. He later became the President of their Outdoor Sports Group. In 1984 Mr. Issler joined H.H. Brown Shoe Company in New York City, becoming the youngest President and CEO in the company’s history. In 1991 H.H. Brown was acquired by Berkshire Hathaway Inc., and in 2016 assumed the management of Justin Brands under BH Shoe Holdings, Inc. Today, Berkshire Hathaway Shoe Holdings is made up of twenty-two brands distributed throughout the U.S., as well as Europe and Asia. In addition, they maintain domestic manufacturing facilities and two Retail Chains.

Mr. Issler is the founder and Chairman of F.A.C.E. (Fashion Association Charity Event) which has raised in excess of 14 Million USD over the past fourteen years to benefit charities focused on China’s underprivileged youth. He was the past Chairman and current Board of Director of FFANY (Fashion Footwear Association of New York); a member of the Harvard School of Public Health’s Advisory Board and is also the Ex-Officio Chairman and current Board Member of the FDRA Association Executive Committee.

In 2007 Jim received the T. Kenyon Holly Memorial Award – Two Ten’s highest honor for outstanding humanitarian achievement, presented to an individual in the footwear, leather or allied industries who exemplifies the spirit and character of the late T. Kenyon Holly, past president of Two Ten. This Award is our industry’s recognition for charitable, civic and public service to our community and our nation.