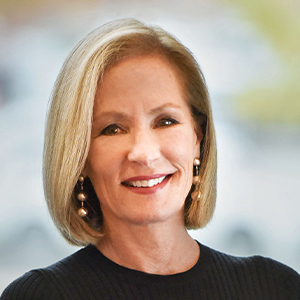 Diane Sullivan is the Chairman and CEO of Caleres, a more than $2 billion portfolio of global footwear brands that includes Sam Edelman, Famous Footwear, Allen Edmonds, Naturalizer, Vionic, and Dr. Scholl’s Shoes. Sullivan joined the company as president in 2004 and was named chief operating officer in 2006. In 2007, she was elected to the board of directors, became chief executive officer in 2011, and was named chairman of the board in 2014. Under her leadership, Caleres transformed from a company that sells shoes to a company that builds brands by using deep consumer insights to create powerful consumer connections.

Sullivan was named the Footwear News Person of the Year in 2018 and 2013, and has been consistently named in the top 10 of the annual Footwear News Power 100 Most Influential Designers, Influencers and Leaders in the Shoe Industry over the last decade.

Sullivan’s philanthropic passion for the shoe industry, gender parity, education, and healthcare was celebrated in 2017 when she received the Footwear News Icon Award for Social Impact.  She has been recognized by the Women’s Forum of New York for her commitment to gender parity, with more than 50 percent women on the Caleres Board of Directors. Sullivan serves on the board of the Two Ten Footwear Foundation and was one of the founders of Two Ten’s Women in the Footwear Industry community (WIFI). She serves on the board of Enterprise Holdings and the Gateway Arch Park Foundation. She is also an active member of Greater St. Louis, Inc., an organization of business and civic leaders working to create jobs, expand inclusive economic growth and improve the St. Louis region’s global competitiveness and CEO’s Against Cancer of Missouri. She has presented as a guest lecturer at Washington University, Saint Louis University, and Webster University, and has served as Executive in Residence at the University of Missouri as well as on the boards of Washington University and BJC Healthcare.

Prior to Caleres she had more than two decades of experience in consumer products, brand building and the footwear industry include serving as vice chairman of Phillips-Van Heusen’s Footwear Group, president and COO of the Stride Rite Corporation, and vice president of product and marketing at Rockport. Prior to that she held key brand management, marketing, and sales positions at The Mennen Company and M&M/Mars.

Sullivan received her MBA from Babson College and her bachelor’s degree in business administration from Boston College. Diane has two married children and enjoys yoga, travel and gardening.