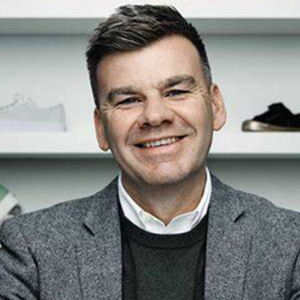 Dave was born in Manchester England and spent his early years growing up with his family in Fort Lauderdale, Florida. He returned to the UK and was educated at Hulme Hall School and graduated from college with a distinction in Business. Dave joined Adidas UK as his first job out of college and worked for 6 years in Sales and Trend.  Dave’s career path continued with Pentland Brands in the UK managing the largest Customer globally for Lacoste. He then relocated to the US in 2006. His career developed further with positions including CEO Pentland Brands North America, President of Lacoste, and Vice President of Ked’s at Wolverine World Wide.

Dave is currently the International Brand President of K-Swiss, with responsibility for driving the Commercial arm of the business globally. Dave also sits on the K-Swiss Leadership Team.

Dave is married to Kate and has a four year old daughter Lily, he currently resides in Westport Connecticut with his French Bulldog Gus.

Dave joined the Two Ten Board of Directors in 2013 and has worked with the Associate Board and also initiatives to bring in a new generation of shoe people.