Held at New York City’s extraordinary American Museum of Natural History, the industry’s most prestigious and highly anticipated evening of philanthropy and celebration brought together more than 800 people from across the industry to enjoy the stunning venue, reconnect with each other, and raise funds for emergency financial assistance, natural disaster recovery, referral services and the many other support services and programs provided by Two Ten for footwear employees and their families.

“Libby, Jesse and I were so proud to be co-chairs for the 79th Annual Two Ten Gala, our industry’s most important annual event,” said Sam Edelman. “The footwear industry is an incredible community – one that comes together to support its own. We wanted this year’s gala to generate excitement about the future of our industry, celebrate the inclusion within it, and encourage the development of emerging talent. Everything we planned and designed was with these goals in mind.”

A key component of the co-chairs’ vision for celebrating inclusion was to seat major event donors and industry veterans with new members of the industry and next-generation leaders. This forward-thinking idea included a mixing of table locations between the main floor and the balcony, incorporating all guests and encouraging interaction, opportunity for giving, and ensuring all felt equally welcome.

The centerpiece of the evening was the celebration of three prestigious Two Ten Footwear Foundation industry honors: the T. Kenyon Holly Award for outstanding humanitarian achievement, presented to Michael Greenberg, President, Director and Co-Founder of Skechers for his years of making a difference in the lives of children with special needs ; Katie Butler, General Manager for Caleres brand Franco Sarto received the A.A. Bloom Award for her tireless fundraising efforts on behalf of the Two Ten Footwear Foundation; and Zappos.com, whose award was accepted by board member and General Manager / Head of Merchandising Jeff Espersen, was honored with the Social Impact Award for their commitment to giving back to their community.   All three recipients gave impassioned speeches about community and the importance of giving back — the hallmarks of both the Foundation and of the industry.

The Foundation also recognized twelve individuals and organizations as this year’s Two Ten Heroes — advocates who extend themselves in extraordinary ways to support Two Ten, often behind the scenes and without any expectation of acknowledgement. Lighted centerpieces at every dinner table featured pictures of each of the Heroes, in addition to full profiles highlighted in the Gala program book.

An important highlight of the evening were the stories shared personally by five industry employees: Mollica, who battled and survived cancer at age 29; Hurricane Irma victim Regina, whose entire family depended on her financially following the devastating storm; Charanor, who avoided becoming homeless by reaching out to Two Ten; College student and first-ever recipient of the Bruce Fendell Memorial Scholarship, Mariah; and footwear store owner Celeste, who recently lost her home, her store and all her possessions to the wildfires in Paradise, California.

The emotional stories inspired Gala guests to support Two Ten by making on-the-spot donations. The Gala co-chairs and an auction team paired up to support the fundraising effort, leading the guests through three different opportunities to give. First was a unique, “$1,000 for every year in the footwear industry” model, which was created by DSW Vice Chairman and Chief Merchandising Officer, Debbie Ferrée at the Gala Kick Off party held at the Sam Edelman showroom in New York in June 2018, during which she was so moved by a client story that she offered a donation of $38,000 to reflect her 38 years in the industry.

The second opportunity was a rousing call for donations in incremental amounts, beginning with $25,000 and moving down to $210, to provide as many attendees as possible with an opportunity to participate. The final donation opportunity was a spontaneous moment led by Two Ten board members Dr. Bobby Campbell, CEO and Founder of BBC, International, and Joe Ouaknine, Chairman of Titan Industries, who appealed to the guests to help raise the final amount needed to meet the evening’s fundraising target.

Collectively, the three efforts totaled $950,000 in donations and achieved the event goal, adding to the pre-Gala fundraising efforts of the Gala Fundraising Committee, led by Joe Ouaknine and Katie Butler along with Joel Oblonsky, CEO of Titan Industries.

“It was a spectacular night, and we are again humbled by the caring and community our industry exudes,” said Neal Newman, President of Two Ten Footwear Foundation. “We are awe-inspired by the outpouring of generosity and, because of it, Two Ten will be able to help thousands of footwear employees in the coming year recover from a natural disaster, a health crisis, pick up the pieces following the loss of a job, and so many other emergencies that can upend their lives. With the unsettling fact that hidden poverty exists in every industry, including our own, we must continue to address critical needs, especially of those colleagues who are amongst the working poor.”

Adding to his comments, Newman noted, “The creative genius of Sam, Libby and Jesse Edelman, coupled with their deep passion for the footwear community, resulted in an extraordinary fundraising event that we’ll be talking about for many years.” 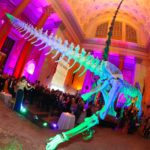 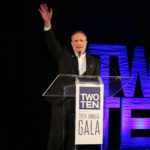 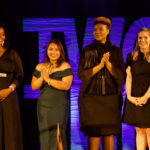 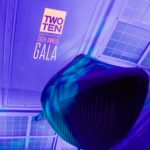 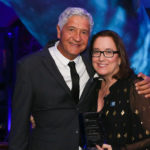 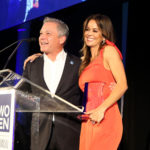